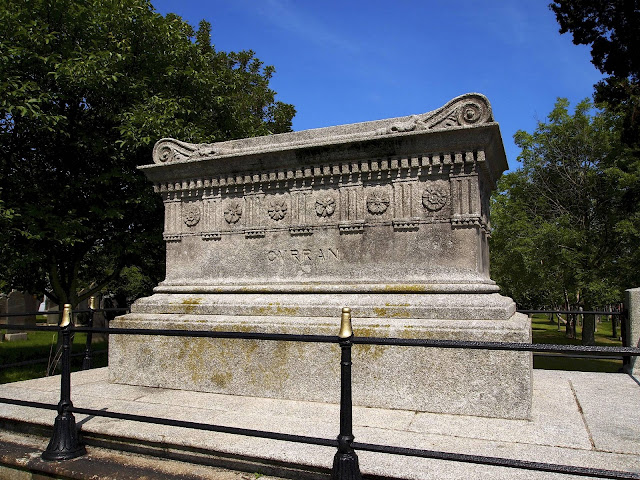 This impressive sarcophagus in 'Curran Square' is the burial site of John Philpot Curran, a noted Irish parliamentarian, barrister, and solicitor. Despite a marked speech impediment, which sometimes undermined his delivery in court, Curran was known for his sharp wit. According to his contemporaries: "His speeches are one fiery torrent of invective, pathos, national feeling and wit. He was a most brilliant wit and of wonderful quickness in repartee". Over time many of Curran's sayings found their way into Bartlett's Quotations including the saying, "Evil prospers when good men do nothing". Curran was known for challenging people both in and outside the court, and is said to have participated in at least five duels. He was a strong advocate of Catholic Emancipation and a severe critic of patronage and corruption. Appointed as King's Counsel, the highest rank a lawyer could achieve in the period, he defended some very famous people in court, including United Irishmen Hamilton Rowan and Wolfe Tone.

The Curran family name is also famous because of the relationship between Curran's youngest daughter Sarah (1782-1808) and United Irishmen commander Robert Emmett (1778-1803). Unbeknownst to Curran, Sarah was secretly engaged to Robert. The relationship was uncovered when her letters to Emmett were discovered after he was imprisoned. Although he had defended other members of the United Irishmen, Curran refused to defend Emmett, who was ultimately sentenced to death on the gallows. Curran betrayed his own daughter by giving her correspondence with Emmett to the authorities. Ultimately he disowned Sarah, forcing her to flee to friends in London. The romantic tragedy of the doomed relationship of Sarah and Robert is played out in poetry and song. Upon her death Sarah was interred in a family plot in Newmarket, County Cork.

Curran was born in Newmarket County Cork Ireland on 24 July 1750. He died in Brompton, a suburb of London England, 14 October 1817. When he died in London he was initially buried in Paddington; however, seventeen years later in 1834 he was disinterred and his remains were transferred to Dublin for reinterment in Glasnevin. The Prospect Cemetery at Glasnevin had only been opened since 1832, two years prior to his reinterment.

Although John Philpot Curran shared a family of eight children with his wife, ultimately she deserted him and he died alone in England.