Mystery Monday: The Curious Case of the Family Wilde: all was not as it appears 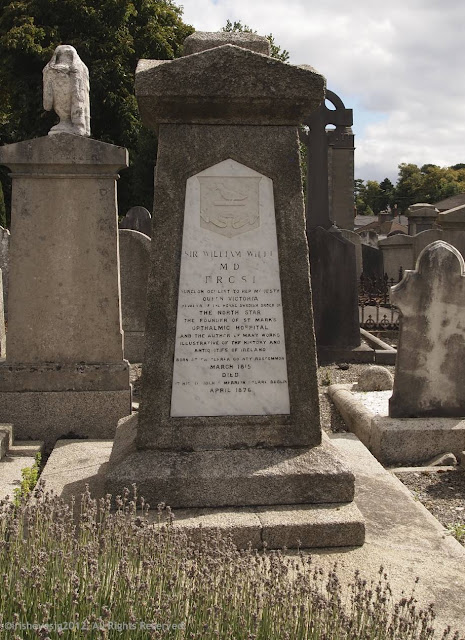 In Mount Jerome Cemetery Dublin stands this monument to the family Wilde, whose best known offspring is Oscar Fingal O'Flahertie Wills Wilde, dramatist extraordinaire. Both the location of the tomb in Mount Jerome and the details on the epitaph to Sir William Wilde may leave one with the impression that the Wildes were a wildly successful family, to use a bad pun, except this was not entirely the case. The curious case of the Wilde Family is a good example of the fact that for some families, even after death, it is very important to keep up appearances.

Sir William Wilde was a highly respected physician, and as his stone attests "surgeon oculist to her majesty Queen Victoria"; however, his life was touched by scandal. In addition to having two illegitimate daughters outside of his marriage to Lady Wilde, Sir William was accused of seducing a colleague's young daughter. Lawsuits were launched on both sides of the matter, and his reputation was never quite the same afterward. After his death it was discovered that he was heavily in debt and virtually penniless. His panel on the stone reads:

Sir William Wilde
M.D.
F.R.C.S.
Surgeon Oculist to her Majesty
Queen Victoria
Chevalier of the Royal Swedish Order of
The North Star
The Founder of St Mark's Opthalmic Hospital
and the Author of many works
illustrative of the history and
Antiquities of Ireland
born at Castlerea, County Roscommon
March 1815
died
at his residence Merrion Square, Dublin
April 1876

Apart from son Oscar, who became the toast of the London stage despite his own scandals, including a period of imprisonment, it appears that the rest of the family enjoyed little success. Although he was educated in Law at Trinity College, and was called to the Bar as a Barrister, Oscar's brother 'Willie' was never a practicing lawyer.  Instead he was a notorious drunkard and spendthrift. Both William and his mother Lady Wilde died penniless in Chelsea England.

At the end of his life Oscar Wilde was living in France, and is entombed beneath a fabulous Art Deco headstone at Pere Lachaise Cemetery, Paris, (click on link for virtual tour). Isola, the daughter of the family, tragically died at the age of ten at the home of an aunt in County Longford, and she is interred in St. John's churchyard. The last line of text on Lady Wilde's panel on this stone is taken from the poem 'Requiescat' which Oscar Wilde wrote in memory of his beloved sister.  Isola is the 'she' to which the lines refer, not Lady Wilde. 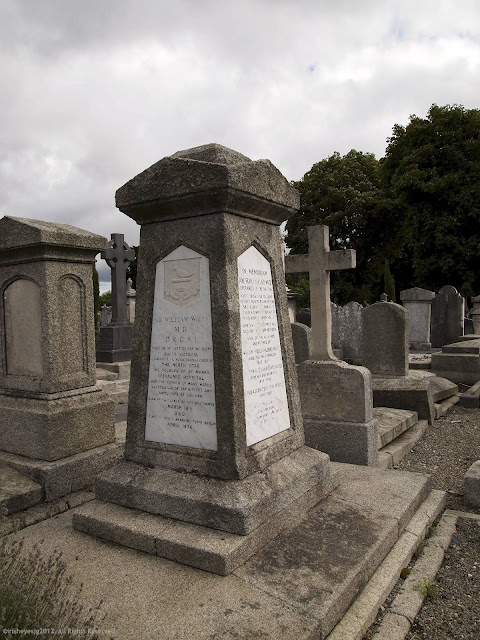 Lady Wilde, the former Jane Francesca Elgee, whose achievements are described at length on the right side panel of this tomb, is not interred within; instead she is buried in an unmarked common grave in Kensel Green Cemetery in London, England. Unfortunately, at the time of Lady Wilde's death, there was neither money to pay for a headstone, nor for a private plot. Her panel on this stone reads:

Wife of Sir William and mother of
William Charles Kingsbury Wilde
Barrister and Journalist
1852 - 1899
Oscar Fingal O’Flahertie Wills Wilde
Poet, Wit and Dramatist
1854 - 1900
Isola Francesca Emily Wilde
1857 - 1867
"Tread lightly she is near
Under the snow,
Speak gently, she can hear
The lilies grow".

Copyright©irisheyesjg2012.
Posted by Éire Historian at 1:32 AM