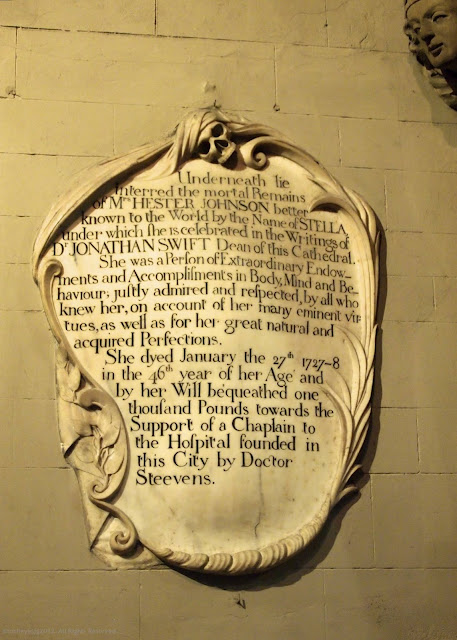 Interred in St. Patrick's Cathedral Dublin, lies the mortal remains of Mrs. Hester Johnson who was, as the memorial indicates, better known to the world as 'Stella'.

In the same year that Gulliver's Travels was published, Jonathan Swift paid a visit to London, but was suddenly called home to Ireland due to the illness of his lifelong friend and muse Esther (Hester) Johnson. Her death, on 27 January 1727-8, is said to have been the greatest sorrow of Jonathan Swift's life. At the time of her death Swift wrote of her:

"The truest, most virtuous, and valuable friend that I, or perhaps any other person, was ever blessed with. I knew her from six years old, and had some share in her education, by directing what books she should read, and perpetually instructing her in the principles of honour and virtue, from which she never swerved in any one action or moment of her life. Never was any of her sex born with better gifts of the mind, or who more improved them by reading and conversations. Her advice was always the best, and with the greatest freedom, mixed with the greatest decency. She had a gracefulness somewhat more than human, in every motion, word, and action. Never was so happy a conjunction of civility, freedom, easiness, and sincerity. With all the softness of temper that became a lady, she had the personal courage of a hero."

In accordance with her wishes, Esther Johnson was buried in St. Patrick's Cathedral. Upon his death Jonathan Swift was buried nearby.

A Compendium of Irish Biography, Dublin, 1878.

Copyright©irisheyesjg2012.
Click on photograph to view larger version.
Posted by Éire Historian at 1:02 AM