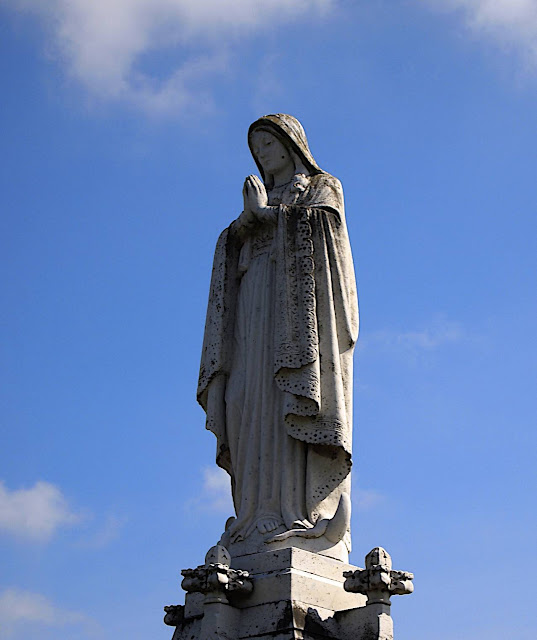 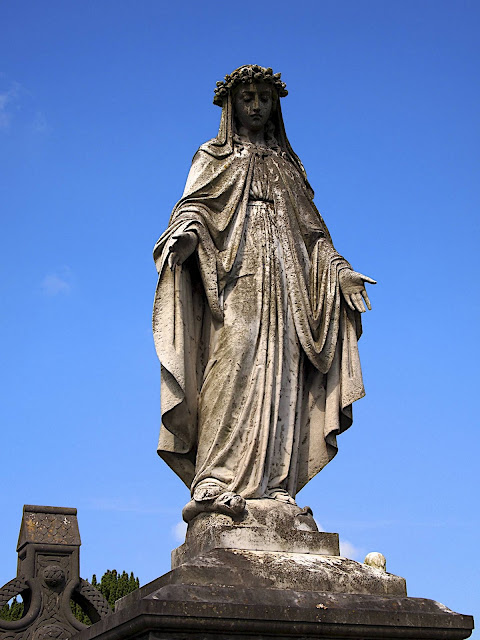 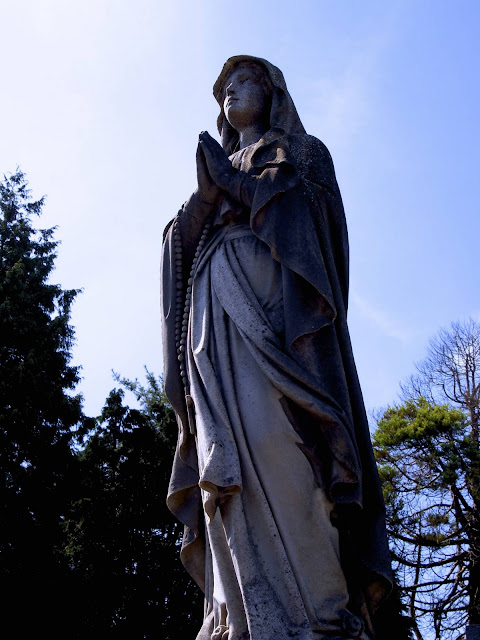 All Photographs ©Copyright J.Geraghty-Gorman 2010.
Posted by Éire Historian at 10:18 AM 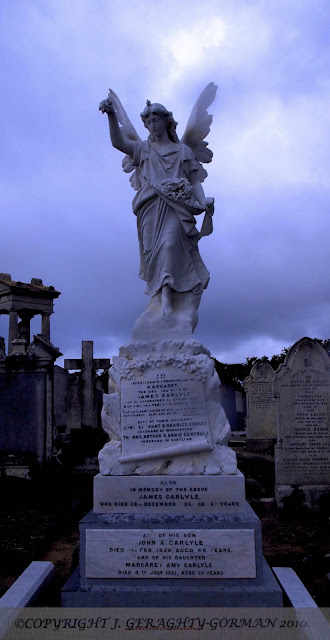 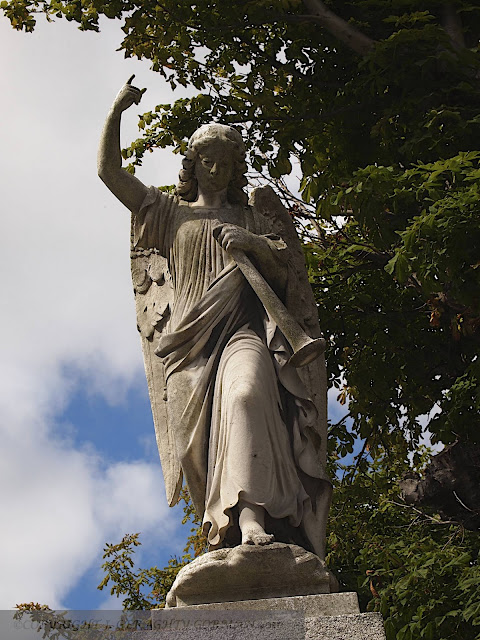 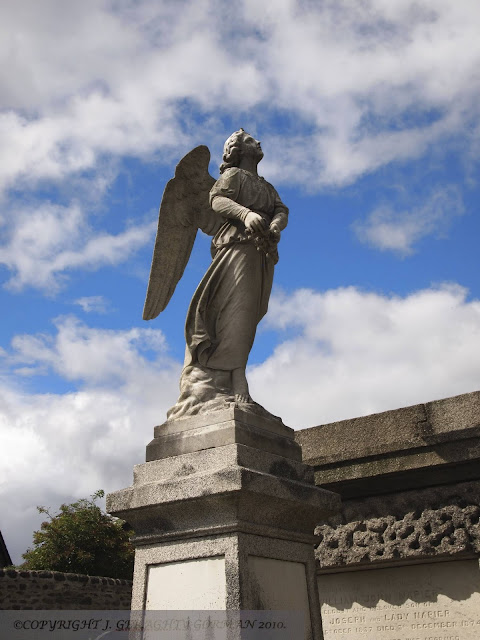 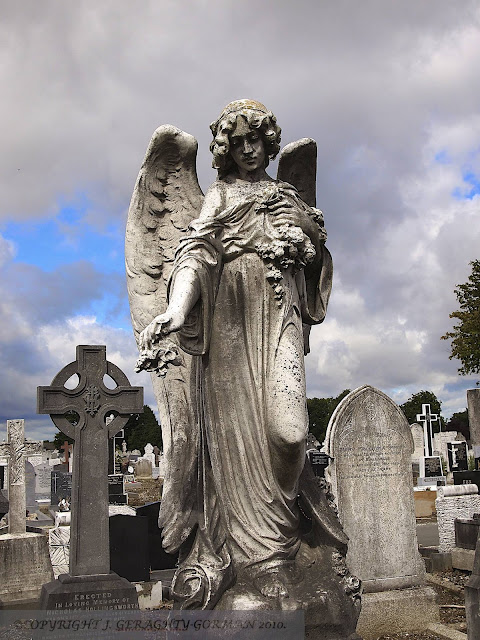 *Click on photographs to view larger version.
All photographs ©Copyright J.Geraghty-Gorman 2010.
If you are viewing these images on any site other than http://www.stiffsandstones.blogspot.com or an RSS feed, then be advised the content has been stolen by the website in violation of copyright laws of Canada and of the United States.
Posted by Éire Historian at 1:59 AM

Thank You, Thank You for the nomination

This post is a little out of character, okay a lot, for a cemetery blog; however, I want to acknowledge, and say thank you, to whomever nominated this blog for Family Tree Magazine's 40 Best Genealogy Blogs 2011.

THANK YOU!!! I feel very honoured to be nominated alongside wonderful and inspirational cemetery blogs, such as Cemetery Explorers. Again, THANK YOU! I very much enjoy the process of producing this blog, sharing the photos I've had the honour to shoot, and learning about the history of the individuals who have gone before us.

A lot of wonderful blogs have been nominated, so if you would like to visit them click here, and if you would like to vote, click here. Voting is open until 20 December, and you may vote as often as you wish. Earlier I tried to put the Family Tree badge in this post, but it kept showing up all wobbly, but now thanks to Carol at Reflections From The Fence (a wonderful blog which is also nominated), I now have the badge.

There's been a lot of cemetery talk around our house lately. Kind of odd that we've chosen the holidays to discuss such things. Anyway, initially I had decided I want my ashes placed in a football (soccer ball for our North American friends) and booted into the ocean off the Cliffs of Moher in County Clare Ireland. Trouble is I might float around for too long, and without a headstone I would be left with no great quotation to pass on to future generations. Oh well, guess I'll have to keep thinking about it. Hopefully I have a lot more time left to think about it. Thank you again. :)

Cheers! Jennifer
Posted by Éire Historian at 7:05 AM 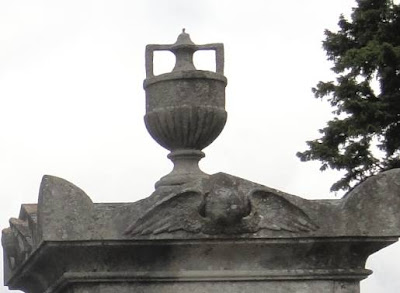 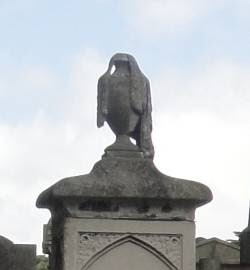 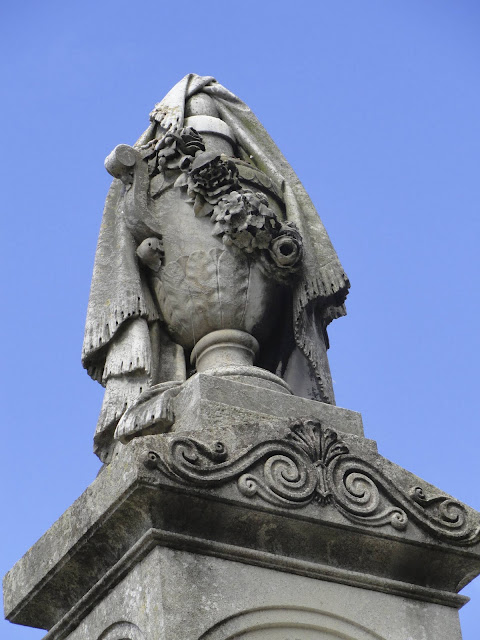 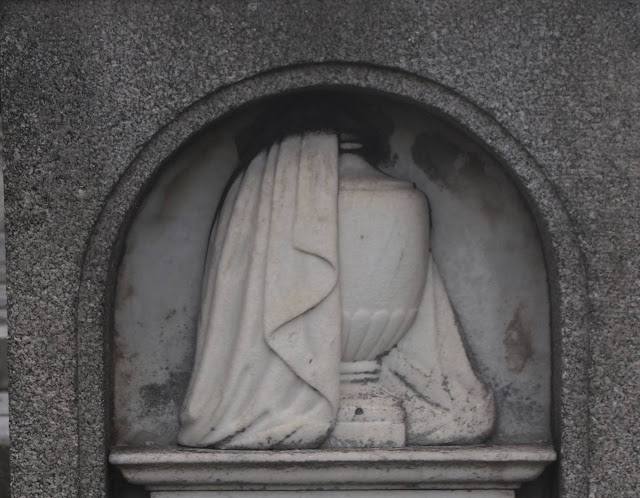 In many cemeteries you will find stones with urns atop them. The urn is a classic Greek and Roman symbol of mourning. With the body viewed as a vessel of the soul, the urn holds the cremated remains so that the soul might ascend to Heaven. The ancient Romans used the urn as a repository for the ashes of the dead, and it was always shrouded out of respect. The urn is a very popular symbol of mourning in Victorian Cemeteries, and Mount Jerome is no exception; however, while it is fairly common to see a shrouded urn, some of the urns here are heavily cloaked rather than lightly shrouded. 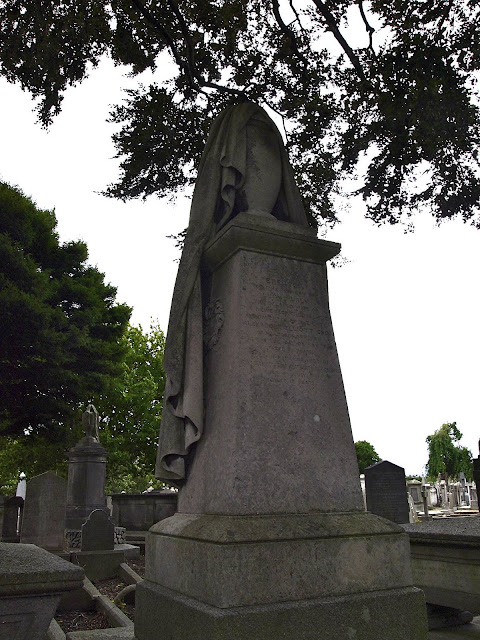 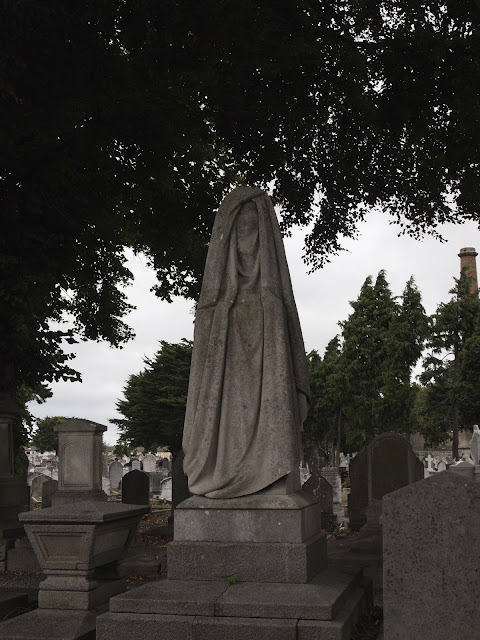 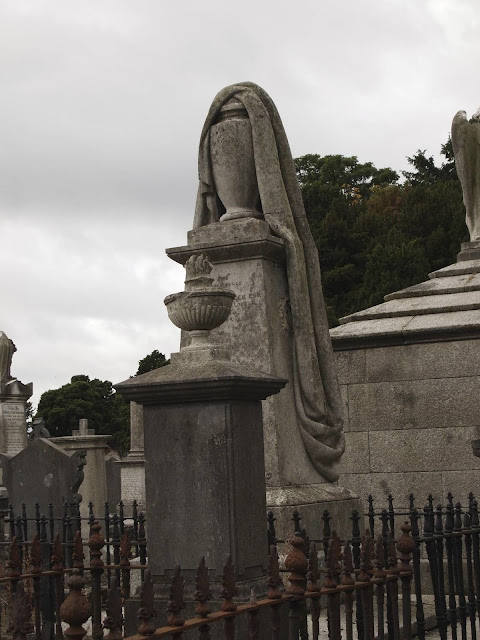 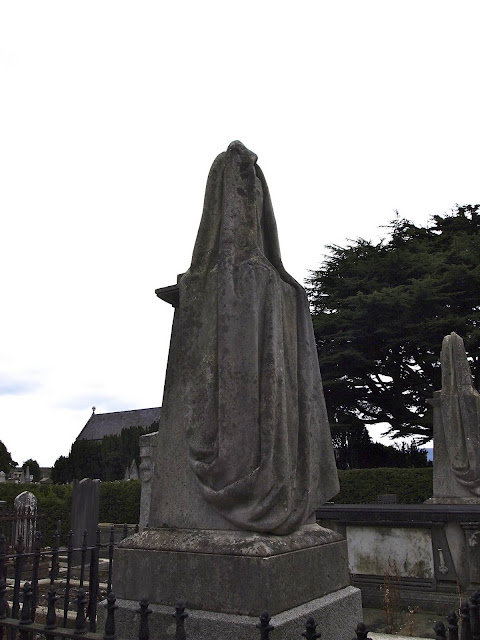 *Click on photographs to view larger versions.
©Copyright J.Geraghty-Gorman
Posted by Éire Historian at 1:24 AM 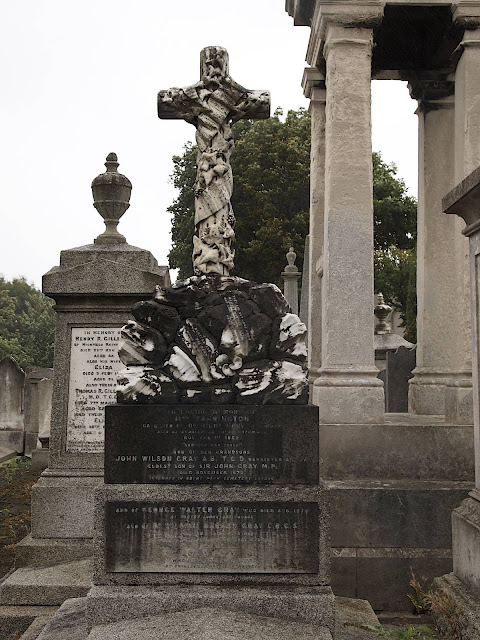 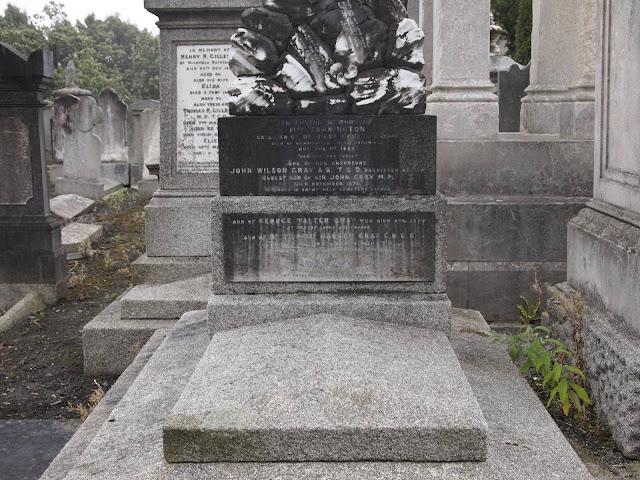 Although the grave marker reads "In loving memory of Mrs. Farrington", we learn little about her because she is described only in terms of her relationships to others, particularly to the men in her life. On the marker we learn of her father, Hugh Lane, her grandsons, the Grays, all of whom are interred elsewhere, and, by virtue of her surname, her husband Mr. Farrington. Hugh Lane and the Grays all have found their places in the history books; however, here on the stone marking her final resting place, Mrs. Farrington is not even afforded the courtesy of her first name. Although it is by no means uncommon to see such a grave, on which a woman is defined in terms of those powerful men to whom she was connected, it gives us pause to wonder, exactly who was Mrs. Farrington?


In loving memory of Mrs. Farrington
Daughter of Dr. Hugh Lane of Limerick
died at Charleville House Rathmines
Nov. the 1st 1862
"Her end was peace"
And of her grandsons
John Wilson Gray A.B. T.C.D Barrister at Law
eldest son of Sir John Gray M. P.
Died November 1872
Interred in Abury Park Cemetery London
And of George Walter Gray who died Aug. 1879
at Vartry Lodge Balleybrack
And of Dr. William Darcan Gray L.R.C.S
Who died January 1886 at Sydney N.S.
Interred at Poorwood Cemetery Sydney
And of
Lady Gray
Who died 27th April 1887
At Charleville House Rathmines
*Click on photographs to view a larger version.
All materials Copyright© J.Geraghty-Gorman 2010.
Posted by Éire Historian at 1:54 AM

We may not like to think about it, but if you are going to be buried in a cemetery, in a marked grave, at some point you have to visit the tombstone store. Here are some shots of the quirky one at Mount Jerome Cemetery in Harold's Cross, Dublin. 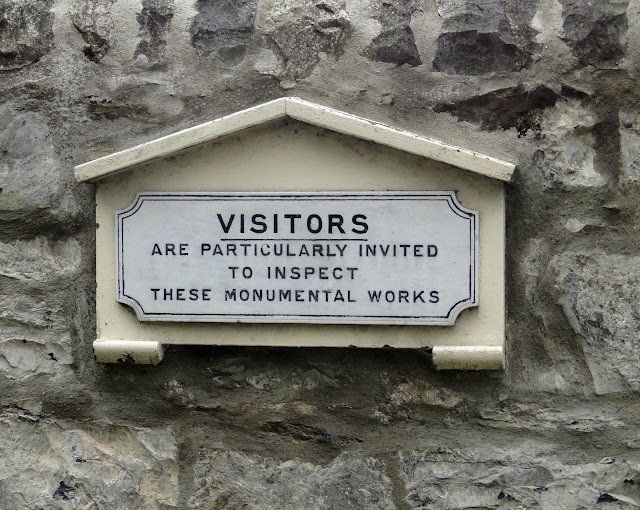 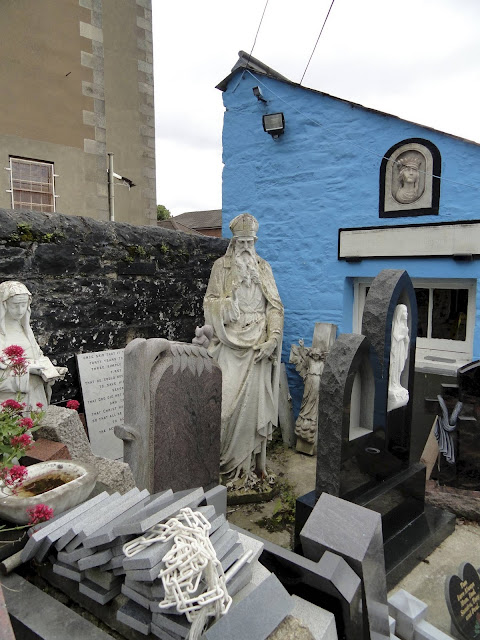 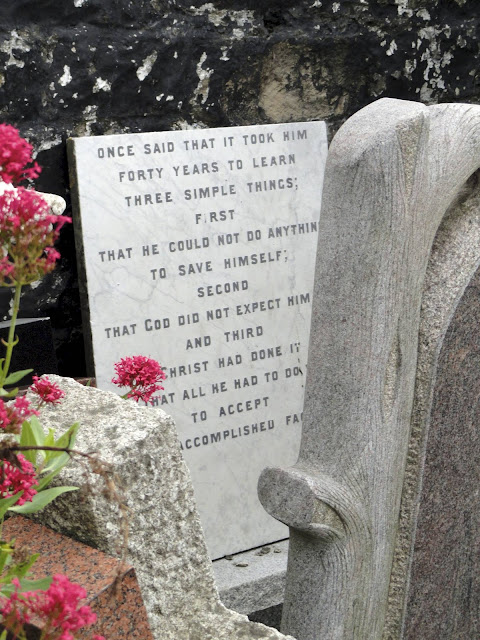 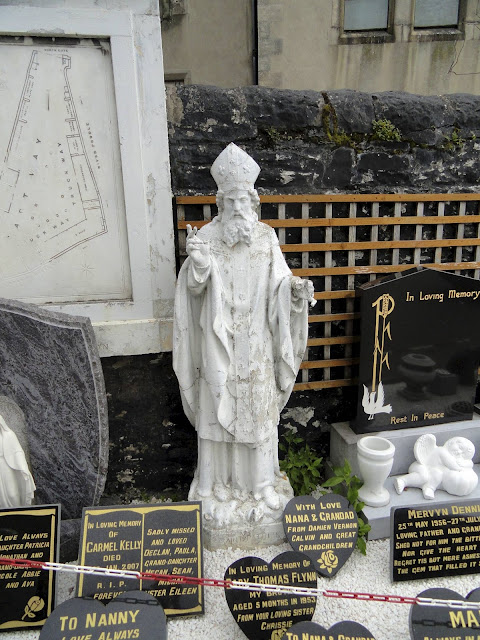 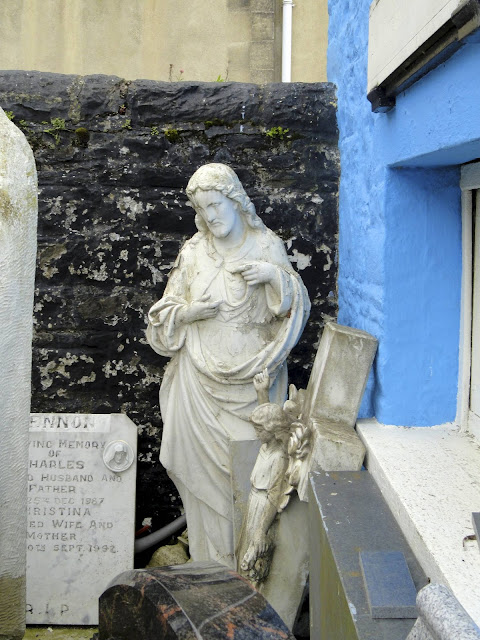 *Click on photos to view larger version.
All Photographs ©Copyright J.Geraghty-Gorman 2010.
Posted by Éire Historian at 1:01 AM