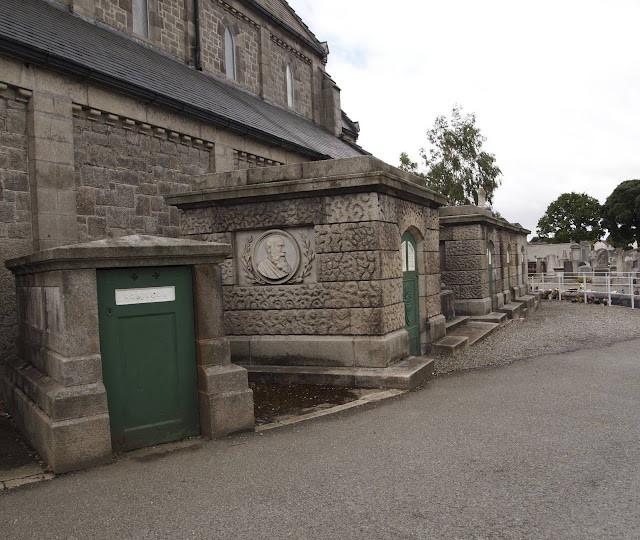 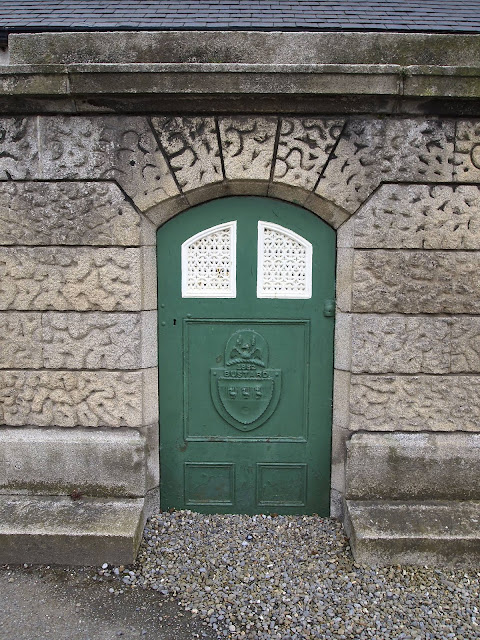 *Click on photographs to view larger version.
All photographs ©Copyright J. Geraghty-Gorman 2011
Posted by Éire Historian at 1:01 AM 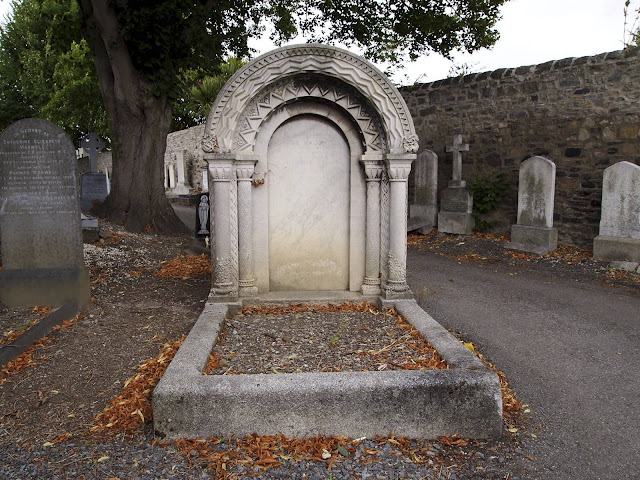 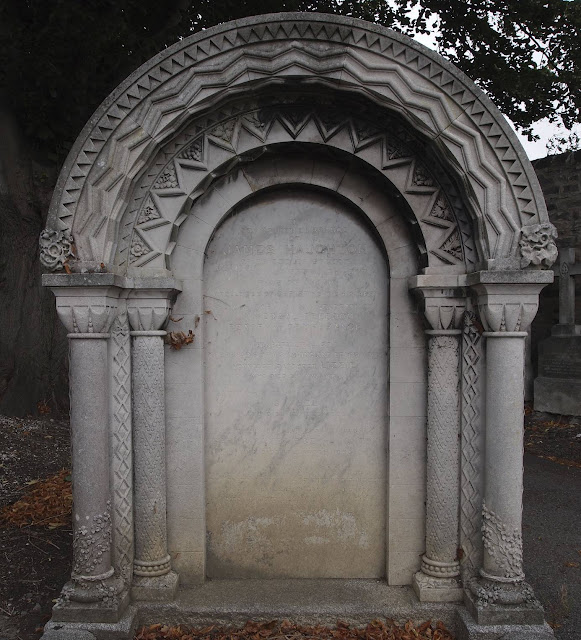 In
Loving remembrance
of
JAMES HAUGHTON
of 35 Eccles Street
died 20 of February 1873
in his 78 year
A follower of Christ he did his best.
He was a well known advocate of
UNIVERSAL FREEDOM
PEACE and TEMPERENCE
Beneath lie also
The remains of his loving and dearly loved
Youngest daughter LIZZIE
Who died 25th May 1884.
and of his only and beloved son
SAMUEL
who died 16th Dec. 1892
also of his dearly beloved daughter
SARAH CAMBRIDGE HAUGHTON
who died 17th March 1893
MARY
the dearly loved and last surviving daughter
of the above named JAMES HAUGHTON
died ? June 1922 in her 78th year
Philanthropist and devoted family man, James Haughton was born into a Quaker family at Carlow, Ireland, 5 May 1795. Following his education, in 1817 he settled in Dublin as a corn merchant, in partnership with his brother, until the year 1850.

After the early death of his beloved wife his attention was devoted to questions of reform. He was a delegate at the 1838 Anti-Slavery Convention in London, and thereafter was known as an advocate of freedom and peace. Haughton believed that the ideals of war were in complete opposition to the teachings of Christ. For thirty-five years he sent out letters on anti-slavery, temperance, crime, capital punishment, land reform, war, and other questions, which were published by the press of all parties with unusual liberality. Haughton was a friend and supporter of Daniel O’Connell and was in favour of the Repeal of the Union.

Although he took part in nearly all of the reform questions of his day, the chief mission of James Haughton’s life was to promote temperence. For many years before his death he devoted most of his time and energy to the cause of total abstinence, and the fight to secure legislative restrictions on the sale of intoxicating drink.

Source: A Compendium of Irish Biography, 1878.
Click on photographs to view larger version.
All Photographs ©Copyright J.Geraghty-Gorman 2011.
Posted by Éire Historian at 1:01 AM 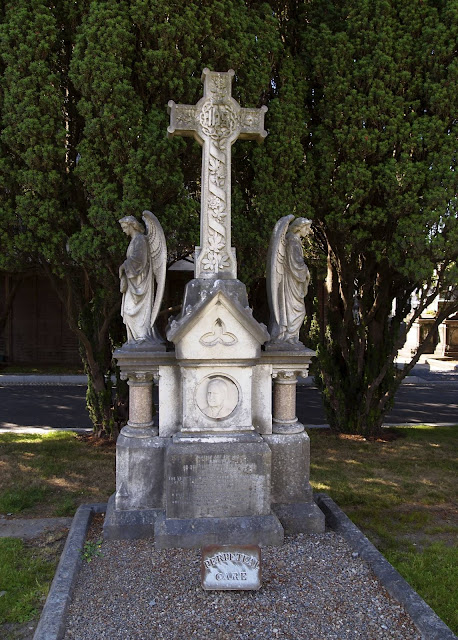 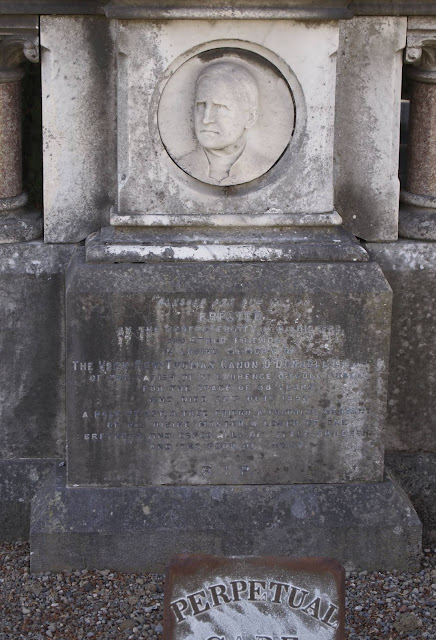 BLESSED ARE THE MEEK
ERECTED
BY THE CONFRATERNITY OF PARISHIONERS
AND OTHER FRIENDS
IN LOVING MEMORY OF
THE VERY REV.d THOMAS CANON O'DONNELL C.C.
OF THE PARISH OF ST. LAWRENCE O'TOOLE
FOR THE SPACE OF 38 YEARS
WHO DIED 22ND OCT.r 1892
A HOLY PRIEST, A TRUE FRIEND, A FAITHFUL SERVANT
OF HIS DIVINE MASTER, A LOVE OF THE
BRETHERN AND ESPECIALLY OF LITTLE CHILDREN
AND THE POOR OF CHRIST
R.I.P. 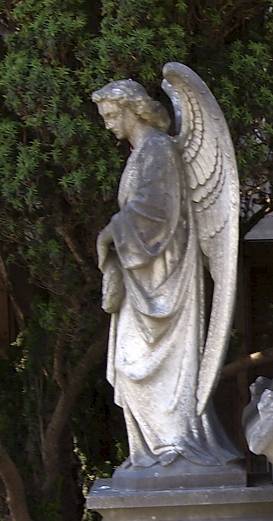 Posted by Éire Historian at 1:01 AM

Thankful Thursday: The privilege to ponder

One of the things I most love about being a graveyard rabbit is the opportunity it gives me to think about those interred beneath the stones I photograph. To wander through a cemetery and observe the ways in which people have been interred by their families is fascinating. To consider the placement of the grave, the choice of the stone, and to imagine what their lives might have been like, is a privilege for which I am truly thankful.
(Click on photos to view larger version.) 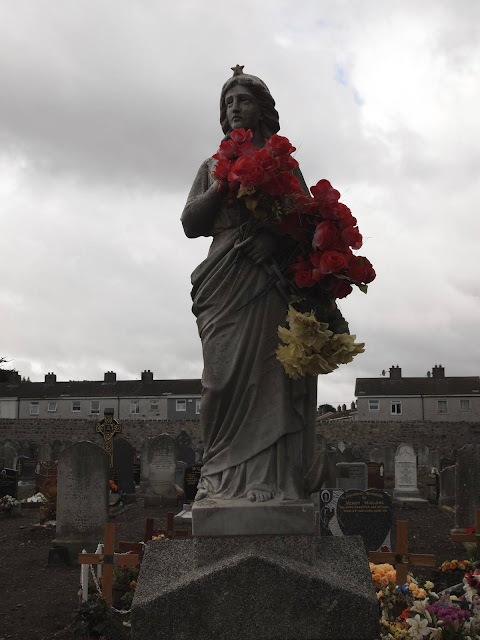 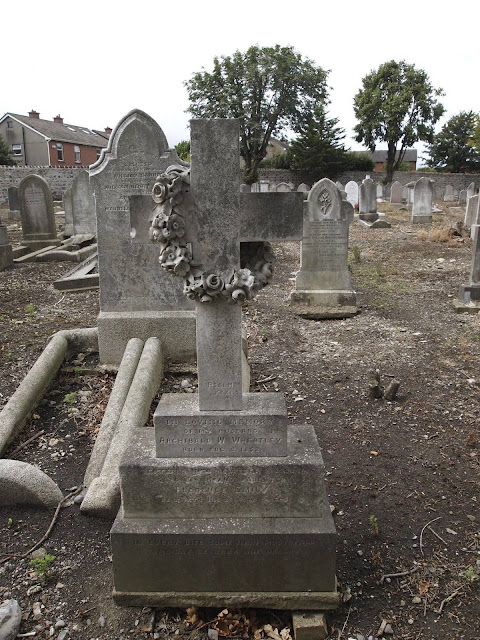 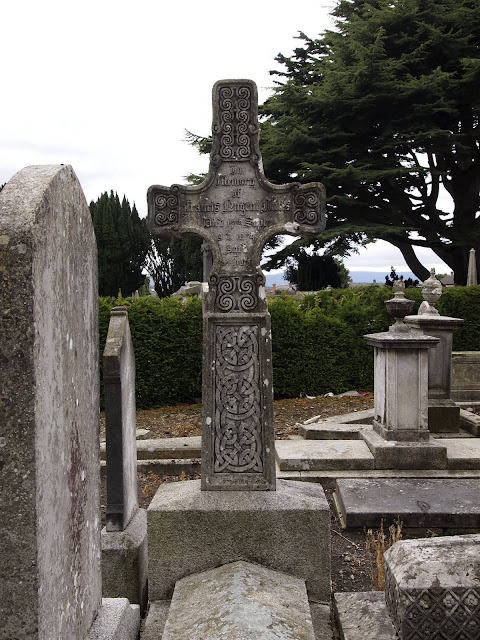 All photographs ©Copyright J. Geraghty-Gorman 2011.
Posted by Éire Historian at 1:01 AM 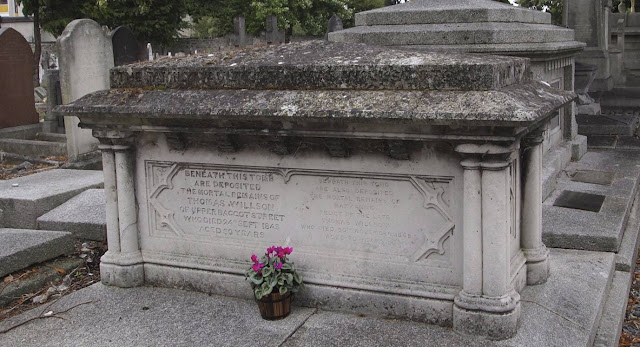 
BENEATH THIS TOMB
ARE DEPOSITED
THE MORTAL REMAINS OF
THOMAS WILLSON
OF UPPER BAGGOT
WHO DIED 24TH SEPT 1843
AGED 80 YEARS
BENEATH THIS TOMB
ARE ALSO DEPOSITED
THE MORTAL REMAINS OF
MARYANNE
RELICT OF THE LATE
THOMAS WILLSON
WHO DIED 30TH NOVEMBER 1858
AGED 70 YEARS
Thomas Willson's 'Relict' (i.e. widow), Maryanne, was twenty five years younger than her husband, and while such an age difference may seem slightly unsavoury to some, it was by no means unusual in the period.

*Click on photograph to view larger version.
©Copyright J. Geraghty-Gorman 2011.
Posted by Éire Historian at 1:01 AM 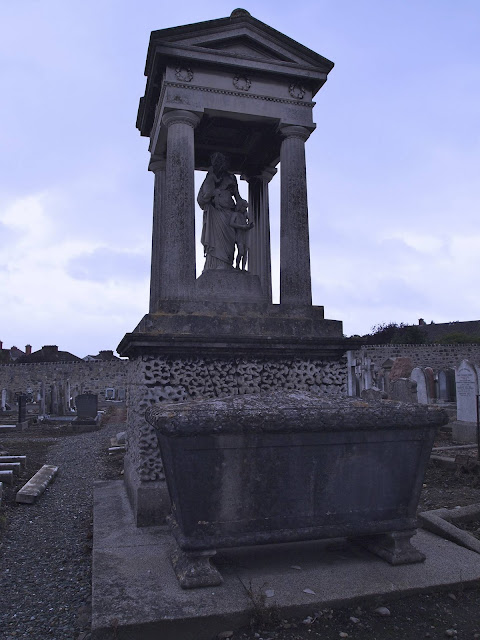 Martha Maria Stewart was born in Lurgan, County Galway, Ireland around 1755. In 1780 she married Reverend William Magee, a Minister of First Lurgan Presbyterian Church. Rev. Magee died in 1800 leaving her dependant on the Presbyterian Widows' Fund. Her two sons died in early adulthood, one from an accident and the other from rabies contracted while he was serving with the British Army in India.

After inheriting a fortune from her two brothers, both military men, she moved to Dublin. In addition to other charitable bequests totalling £40,000, Mrs. Magee left £20,000 to endow a college for the education of the Presbyterian ministry. After prolonged controversy with the General Assembly, led by Henry Cooke, in 1865 the trustees established Magee College, Londonderry. Despite Mrs. Magee's wish that the college be for the education of the Presbyterian ministry, all denominations were accepted from its very beginning. In 1970 it became an integral part of the New University of Ulster (now the University of Ulster). Martha Maria Stewart Magee died in Dublin on 22 June 1846 and is buried in this vault in Mount Jerome Cemetery. 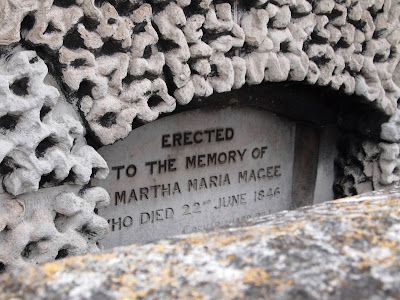 The monument over Martha Maria Magee's grave is particularly interesting. Architecturally it is in the classical style of the ancient world favoured by the Victorians, with Doric columns supporting a canopy and the figures dressed in flowing robes. The face of the mother figure has weathered in a curious fashion so that it is darkly obscured. At some camera angles the mother's face seems to disappear. Also notable is her relationship with the man interred under the stone directly in front of hers.


Erected
To the Memory of
Mrs MARTHA MARIA MAGEE
who died 22nd June 1846
By her Executors Revd. RICHARD DILL
JAMES FLEMING
Esq.
The monument which stands directly in front of the Magee tomb, and rather curiously obscures the base of it, is that of Reverend Richard Dill, named on her tomb as one of Mrs. Magee's Executors. The stones are so close together that you have to lean over Dill's monument in order to read the inscription on the base of the Magee tomb. I am left wondering about his relationship with Mrs. Magee given that the last line of his epitaph reads, "He delivered the poor that cried and the fatherless, and caused the widow's heart to sing for joy." 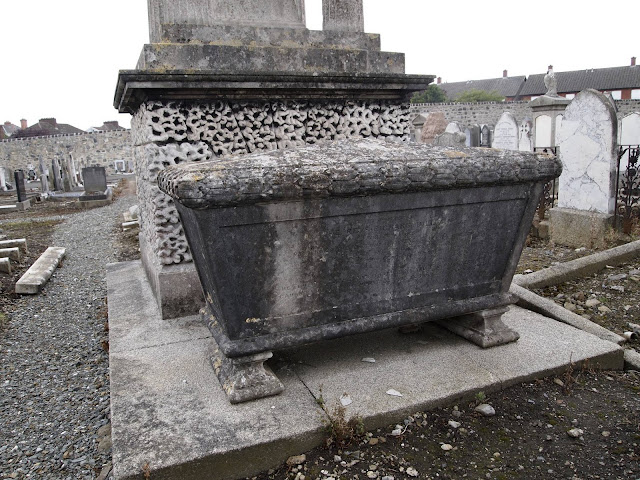 
In Memory of
The Revd. RICHARD DILL A.M.
for 24 years
Pastor of the Ormond Quay Presbyterian Church
who died on the 8th December 1858
in the 52nd year of his age
"He delivered the poor that cried and the fatherless
and caused the widow’s heart to sing for joy."
Job. XXIX. 12. 13.
All Photographs ©Copyright J. Geraghty-Gorman 2011 and may not be reproduced in any form.
*Click on Photographs to view larger version.
Posted by Éire Historian at 1:01 AM 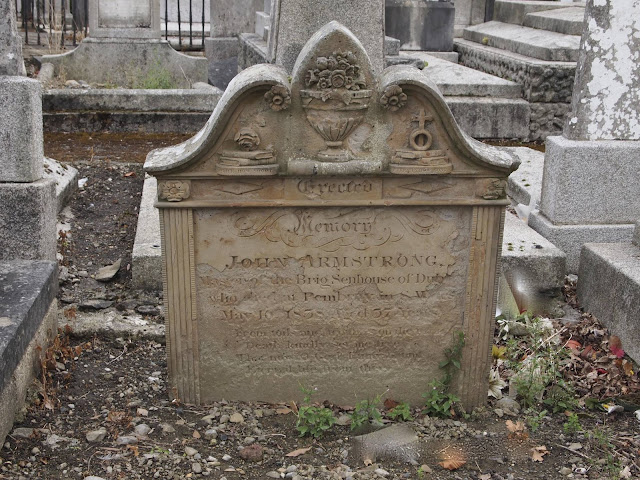 In part the stone reads:


Erected
In Memory of
John Armstrong
Master of the Brig Senhouse of Dublin
who died at Pembray in S. Wales
May 10 1838 Aged 57 Years
*Click on photograph to view larger version.
Photograph ©Copyright J. Geraghty-Gorman 2011.
Posted by Éire Historian at 1:01 AM