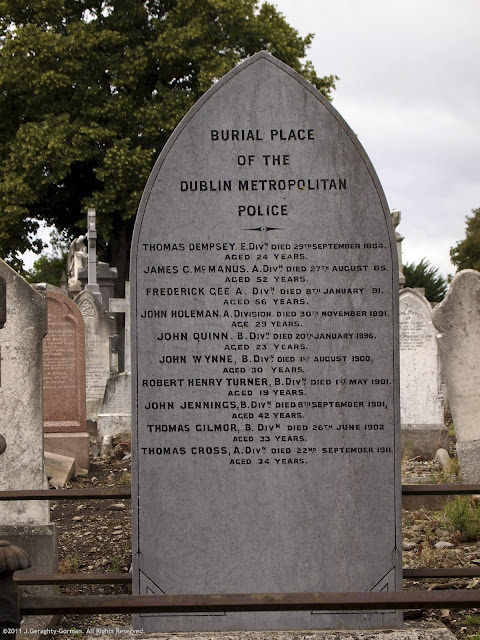 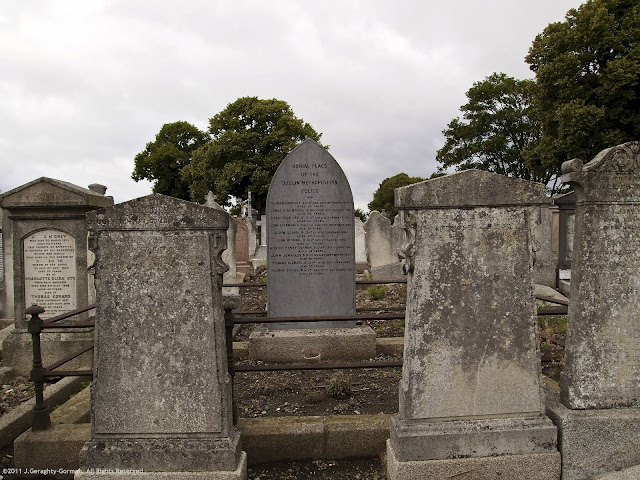 Click on photographs to view larger version.
All Photographs Copyright© J.Geraghty-Gorman 2011.
Posted by Éire Historian at 1:02 AM 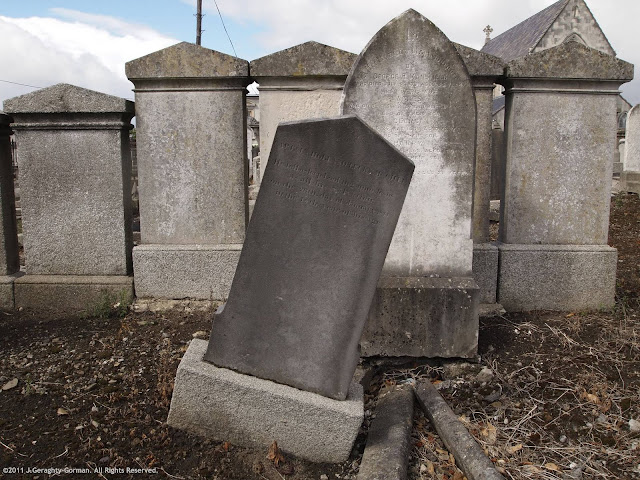 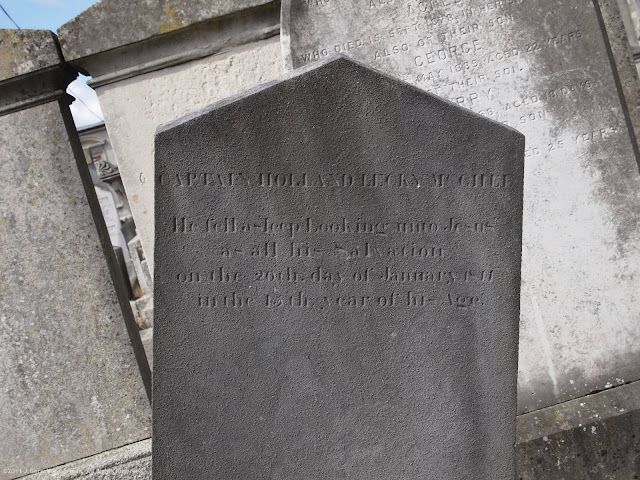 Offering little information about him this teetering stone reads:


Captain Holland Lecky McGhee
He fell asleep looking unto Jesus
as all his Salvation
on the 20th day of January 1844
in the 45th year of his Age.
Posted by Éire Historian at 1:02 AM 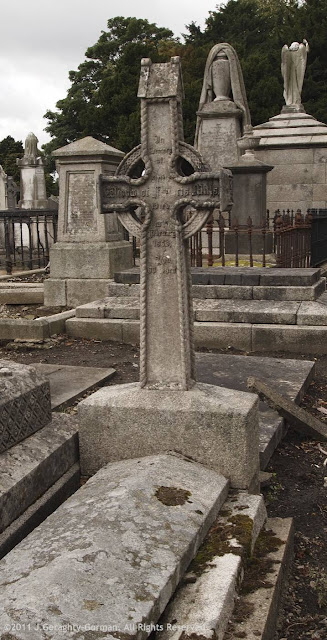 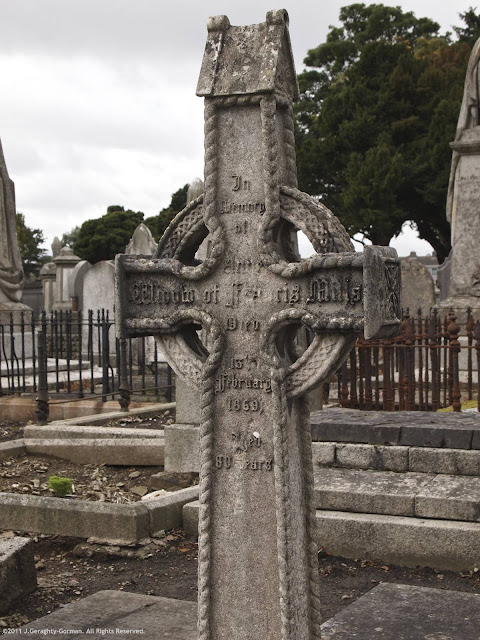 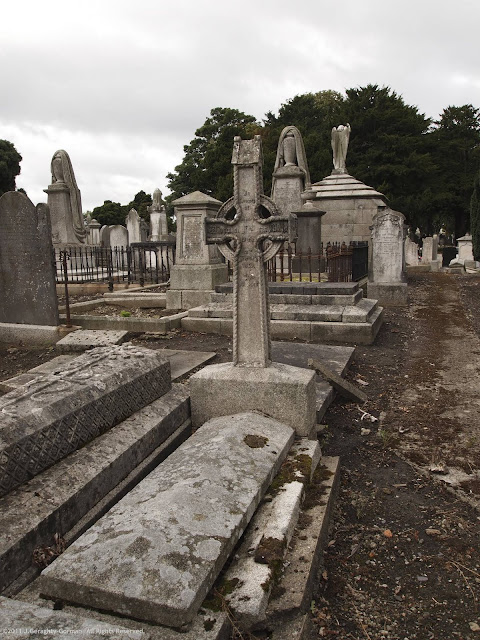 Her maiden name is unrecorded; her forename will soon be dust, but we are told Anne was the Widow of Francis Mills.  As is often the case in this period, Anne is remembered by virtue of her connection to her husband.


In Memory of
Anne
Widow of Francis Mills
Died
13 February
1869,
Aged
80 Years
Click on photographs to view larger version.
All photographs Copyright© J.Geraghty-Gorman 2011.
Posted by Éire Historian at 1:02 AM 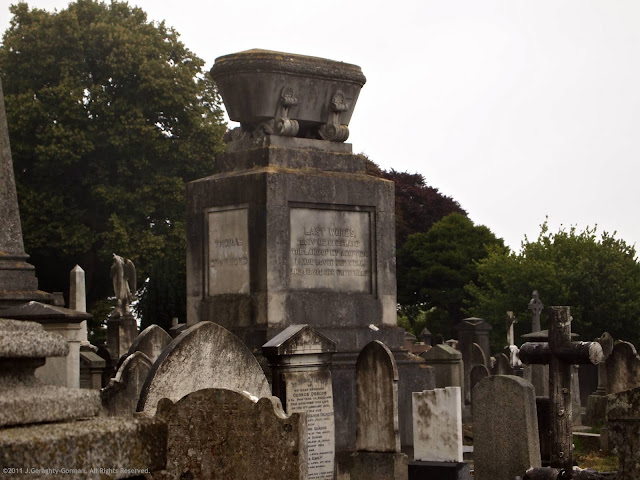 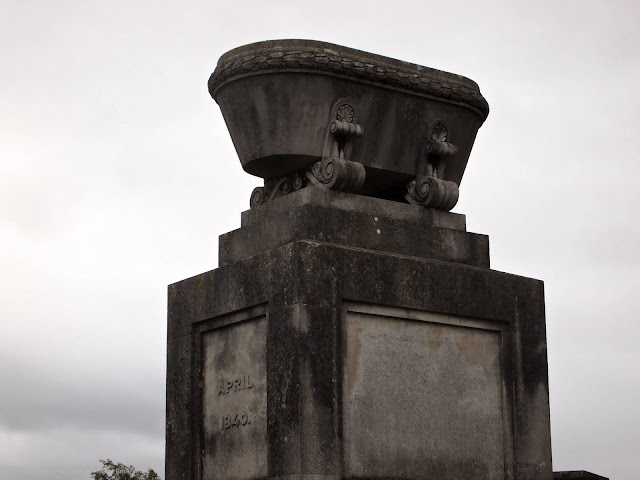 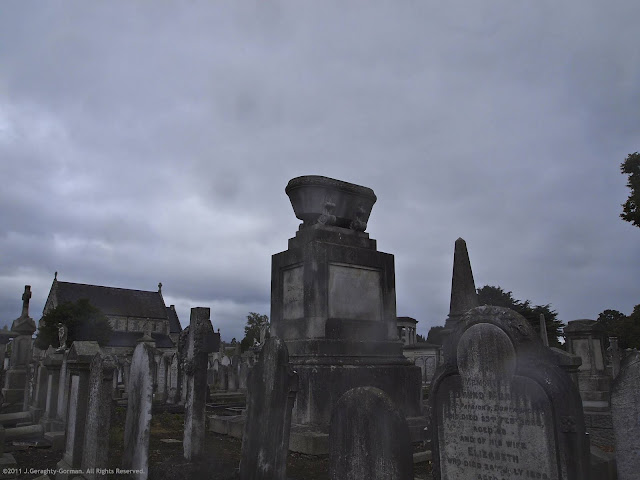 The epitaph bears a paraphrase of what were allegedly his last words:


BURY ME IN IRELAND
THE LAND OF MY ADOPTION
I HAVE LOVED HER WELL
AND SERVED HER FAITHFULLY.
During his short life of only 43 years, Scottish-born, Thomas Drummond served as a Captain in the Royal Engineers, Head of the Boundary Commission (1832), Private Secretary to the Chancellor of the Exchequer, and Under Secretary of Ireland (1835 until his death 1840).

Popularly known as 'The Drummond Era', it is his time as Under Secretary of Ireland for which Thomas Drummond is best remembered. It is said that he was respected by the Irish because he ruled from Dublin Castle with impartiality and fairness. During his tenure, Drummond grappled with injustice in the legal system, monitored issues accruing as a result of the growing Orange Order movement, and established a centralized Police Service. He had other initiatives planned as well when he died while in office, 15 April 1840.

Click on photographs to view larger version.
All photos Copyright© J.Geraghty-Gorman 2011.
Posted by Éire Historian at 1:03 AM

Wordless Wednesday: Cruciform: The traditional and the untraditional 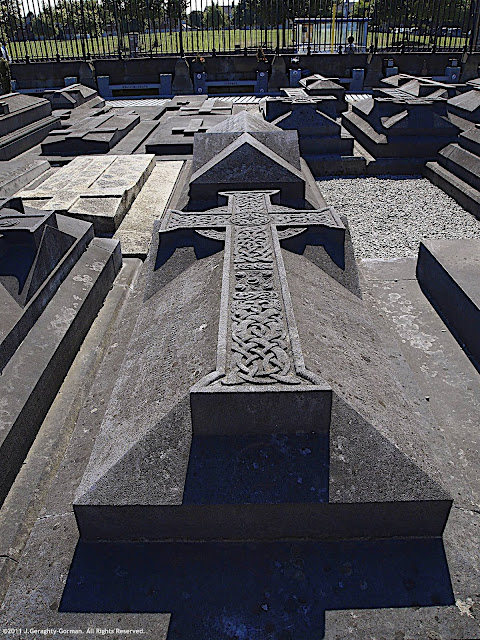 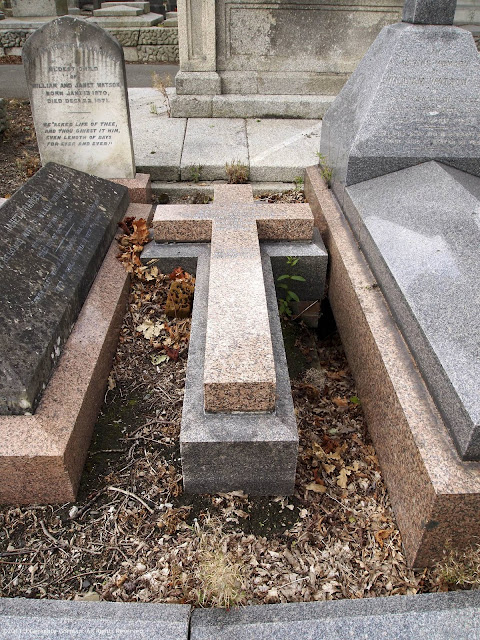 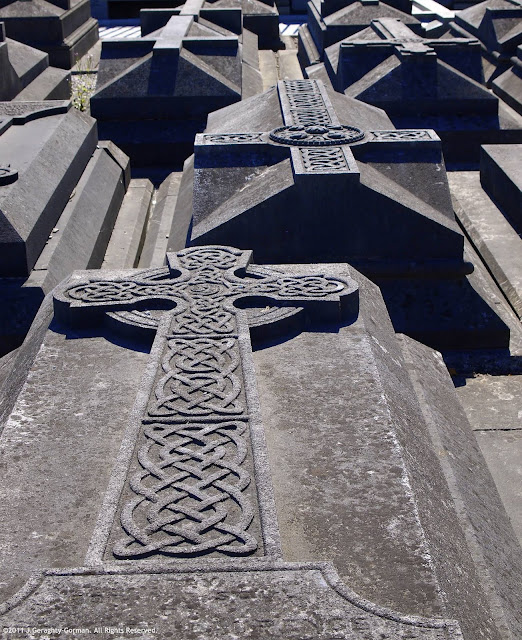 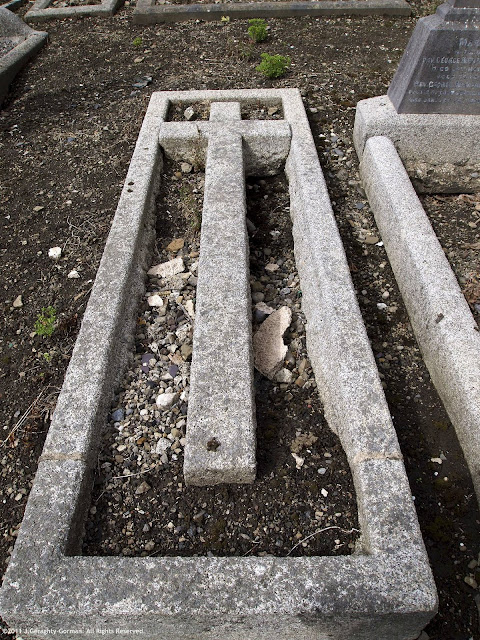 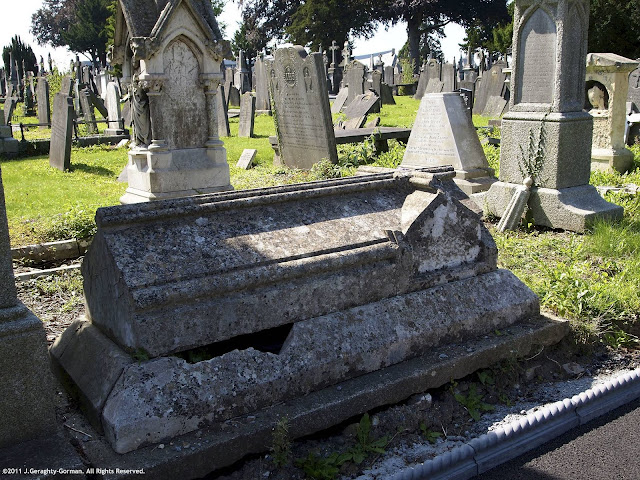 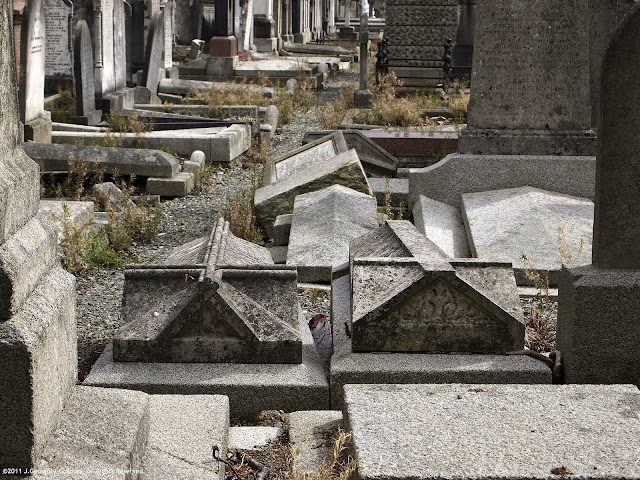 All photographs Copyright© J.Geraghty-Gorman 2011. All Rights Reserved.
Click on photographs to view larger version.
Posted by Éire Historian at 1:01 AM

Just inside the main gates of Glasnevin Cemetery, on the left hand side, lie row upon row of cruciform tombs. Interred within are members of the clergy, priests and canons, and other men of stature within the religious community. Many of the tombs have ornately carved celtic crosses adorning them, and some bear only simple crucifixes. 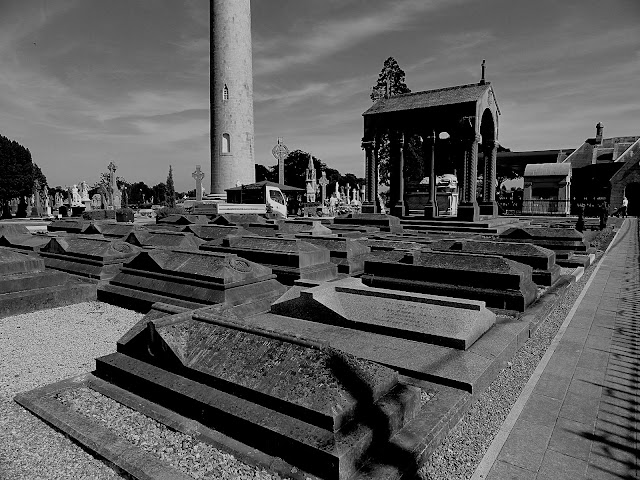 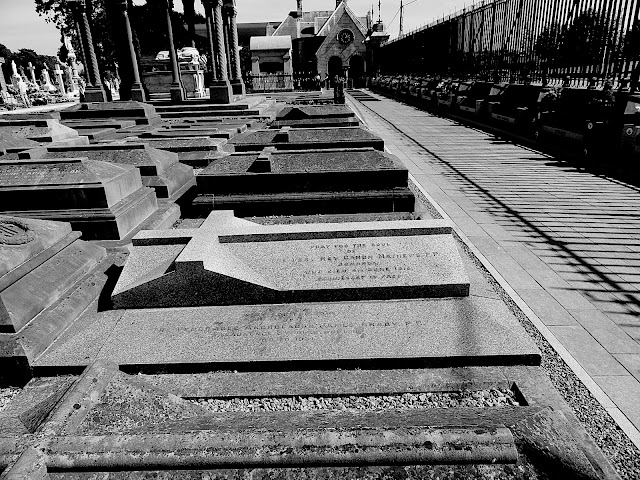 *Click on photographs to open larger version.
Posted by Éire Historian at 1:01 AM

Among the rows of cruciform tombs: William J. Walsh, Archbishop of Dublin 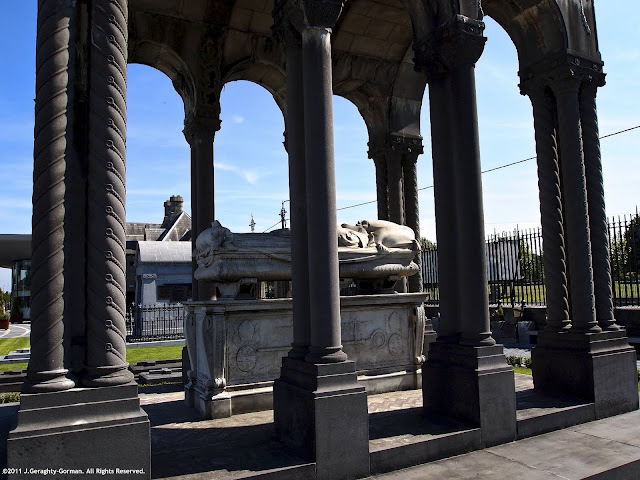 Towering over the rows of cruciform tombs in Glasnevin cemetery is the final resting place of William J. Walsh, Roman Catholic Archbishop of Dublin, and Primate of Ireland. Walsh was born in Dublin 30 January 1841. He was educated at the Catholic University, under Cardinal Newman, and continued his clerical studies at St Patrick’s College, Maynooth. After graduation, he was appointed Professor of Dogmatic and Moral Theology, a post he held from 1867 to 1878. He became president of Maynooth College in 1881.

Walsh took an active part in public affairs, and was a leading nationalist in the hierarchy of the Irish clergy. Walsh openly endorsed the land agitation movement of the 1880s. Possibly because of the stand that he took, the British government opposed his appointment as Archbishop of Dublin in 1885. He was a strong supporter of Charles Stewart Parnell, the leader of the Irish Parliamentary Party and founder of the Irish National Land League; however, when the scandal broke of Parnell’s relationship with Mrs Kitty O’Shea, Walsh turned against Parnell.

William J Walsh died in Dublin in 9 April 1921. Following his death he was described as “the greatest Archbishop of Dublin since St Laurence O’Toole”. His monument in Glasnevin cemetery was sculpted by renowned Irish sculptor Albert Power. 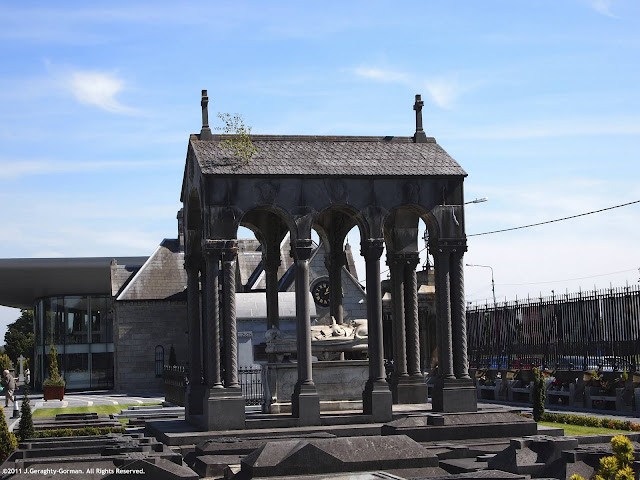 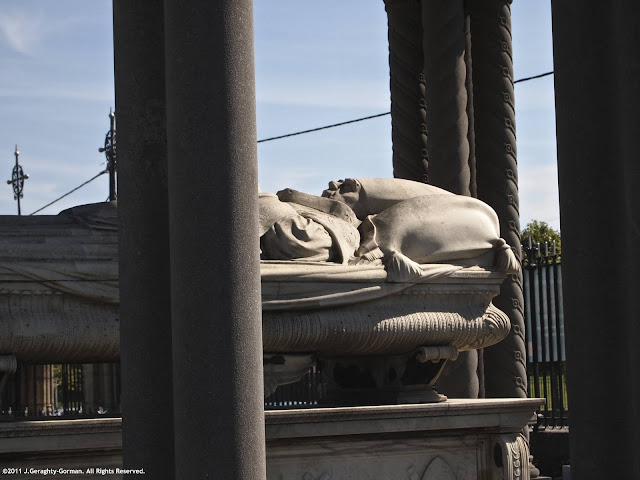 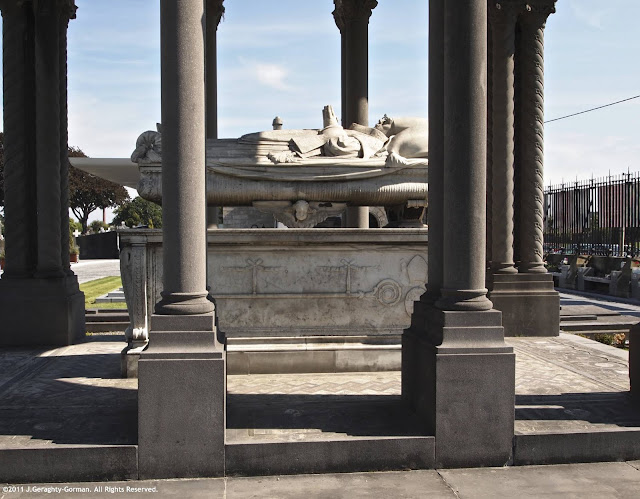 Biographical Reference: Glasnevin Trust.
Posted by Éire Historian at 1:02 AM

Tombstone Tuesday: The Anchor of the Family 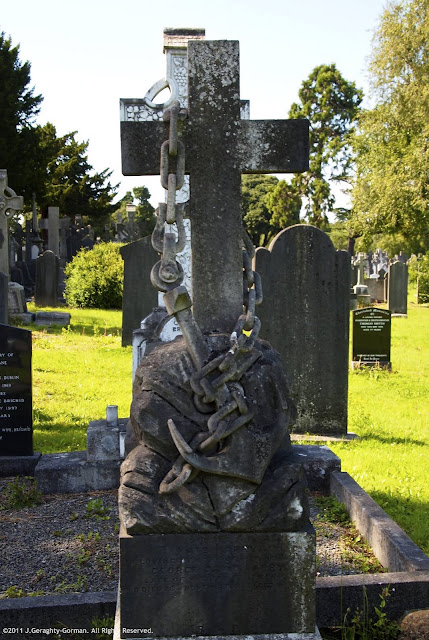