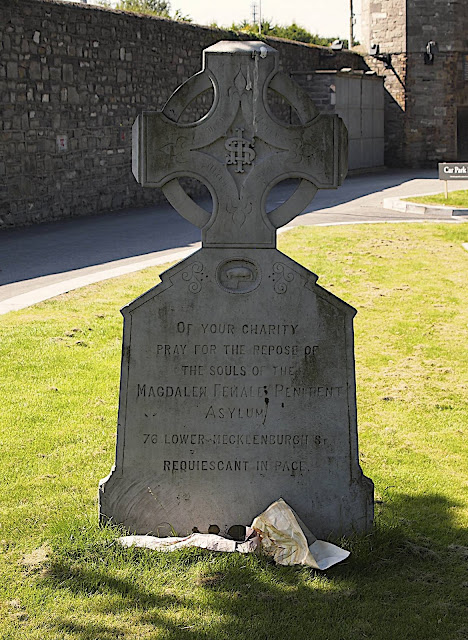 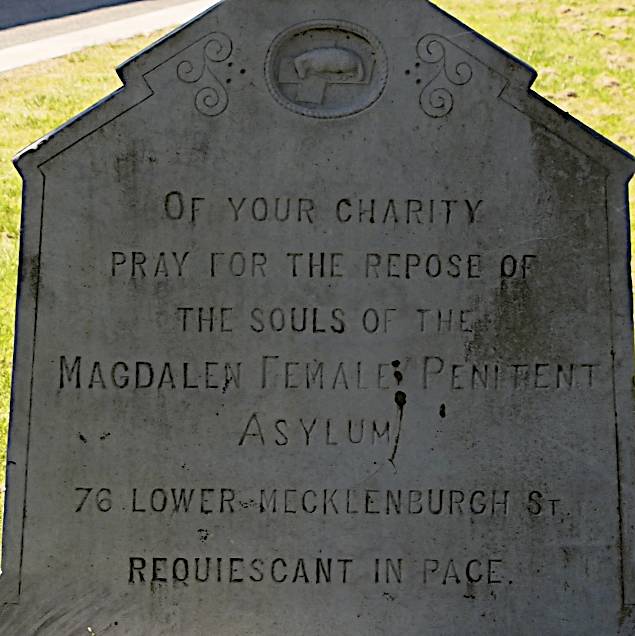 On a boulevard separated by a roadway from surrounding graves lies a memorial erected to the memory of those woman and girls once held at the Magdalen Penitent Asylum of Lower Mecklenburgh Street, Dublin. Some have claimed the stone stands over a mass grave; however, the Catholic order of the Sisters of Charity, who were once charged with the responsibility of operating some of the Catholic Magdalen Asylums in Ireland, vehemently deny this assertion, saying it is only a memorial.

The Magdalen Female Penitent Asylums have a notorious history. In the mid 19th century these institutions were founded all over Europe principally for the detention of prostitutes undergoing reform. In Ireland separate asylums were operated by both the Church of Ireland and the Catholic church. In these women-only 'homes' inmates were 'strongly discouraged' from leaving, in fact many of them were forcibly confined, and were sometimes detained for life. They were forced to work without pay in the laundries which adjoined the residences, thus the asylums are often referred to as the 'Magdalen Laundries'.

Upon entering the asylum a woman's hair was completely shorn or cropped very short, and she was forced to wear drab, shapeless clothing. If she had any children they were taken away from her. Subjected to brutal discipline, these women were absolutely forbidden to discuss their lives prior to entering the asylum. Their daily regimen included enforced silence and extensive prayer.

The asylum referred to on this grave marker was situated on Lower Mecklenburgh street in the heart of the red light district in Dublin, the district known as "The Monto". The area was dominated by tenements and most of the residents lived in grinding poverty. Many of the young women who turned to prostitution were country girls who had come to Dublin to work as domestic servants in the homes of the wealthy. Suffering sexual abuse by the master of a house or his sons, if they became pregnant they were quickly expelled from the home. Unable to return to their family homes, they often ended up working as prostitutes simply to survive and provide for their children.

Over time the population of prostitutes in Dublin decreased and the Magdalen Asylums became the place of incarceration for other "fallen" women such as unwed mothers, unmanageable girls, and those who were "simple minded". Perhaps the most shocking detail of their history is that women were still being admitted to these institutions in the 1980s. The last of the asylums was closed in 1996.

*Click on photos to view larger version.
References: Finnegan, Frances. Do Penance or Perish: A Study of Magdalene Asylums in Ireland Piltown, Co. Kilkenny: Congrave Press, 2001.
Kearns, Kevin. Dublin Tenement Life Ireland: Gill & MacMillan Ltd, 1994.
All Materials and Photographs ©Copyright J. Geraghty-Gorman 2010 and may not be duplicated in any way without the prior written permission of the author.
Posted by Éire Historian at 3:36 AM