After the release of James Cameron's film Titanic, the grave marker for Irish born J. Dawson was one of the most visited of the Titanic victims. For months it was covered with flowers, love poems, and keepsakes. Many people assumed that the fictional character Jack Dawson, as portrayed by Leonardo DiCaprio, was based on the man interred in this grave.

The real J. Dawson was in fact far from a romantic figure. 'J' was not 'Jack', but Joseph Dawson. Joseph was born into the tenement life of inner city Dublin in 1888 to parents who were widowed from their first spouses, but not married to each other. The 1901 census shows his family living in two rooms of a tenement in Rutland street. Their mother died when Joseph was eighteen, and so he and his younger sister Maggie moved to England. After a brief stint in the Royal Army Medical Corp, in 1911 Dawson moved into the family home of John Priest, a White Star Line fireman. Dawson was tempted into life on the high seas by dreams of seeing the world. He signed on with the White Star Line, serving first on the Majestic, and then on the Titanic, where he worked as a coal trimmer, responsible for bringing wheel barrows filled with coal to the firemen at the furnaces.

The RMS Titanic fatality report produced at the time, and included below from the Nova Scotia Canada Archives, incorrectly identified Dawson's job as a fireman, and incorrectly estimated his age as 30. Joseph Dawson was 23 years old when he died. 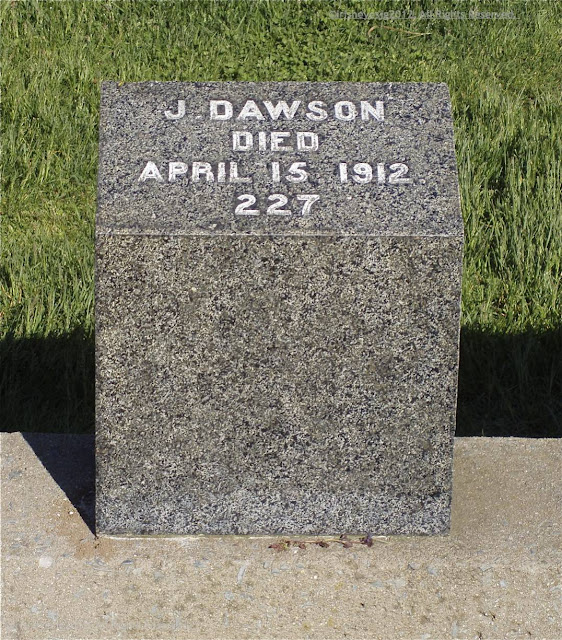 Galway born Ernest Waldron King's employment aboard the ships of the White Star Line was the welcome answer to a year long stint of unemployment. His family, including his father, a Church of Ireland curate, were proud of him and encouraged him in his career on the sea. However, an incident early in King's career hinted that a life at sea might not be a charmed one. Although he came away from it unscathed, in 1911 Ernest King was working onboard the ship Olympic when she collided with the cruiser HMS Hawke. Her proximity to Southampton meant the ship did not sink, but was brought back into harbour. King left the Olympic and signed on to work on the Titanic.

Ernest King's body was not found until two weeks after the sinking of the Titanic, and it was found floating almost fifty miles away from where the ship sank. The body, counted as number 321 of those drawn from the sea, was sent to the morgue at Halifax, Nova Scotia, where it was identified as that of Ernest Waldron King. King was interred in Fairview Lawn cemetery, 9 May 1912.

The RMS Titanic fatality report produced at the time, and included below from the Nova Scotia Canada Archives, purports that the body is "probably purser's assistant". 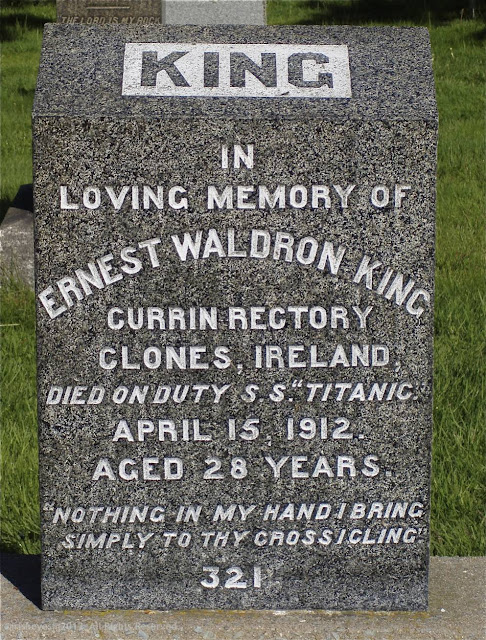 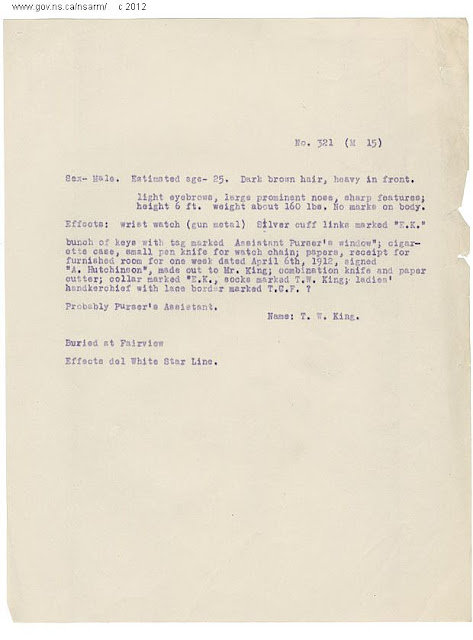