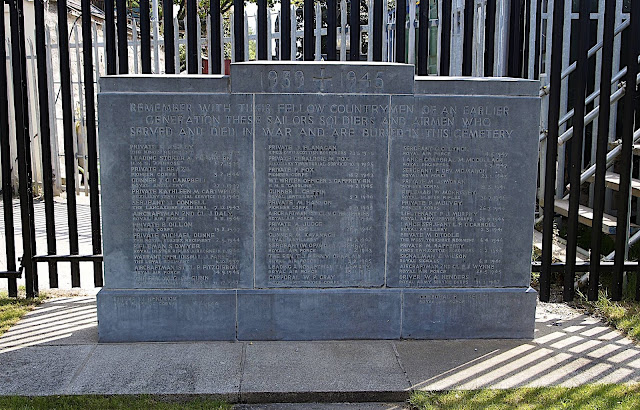 This stone in Glasnevin Cemetery is a very interesting one because it stands as a memorial to those persons who died in military service between 1939 and 1945. The historians among us will note that those dates conventionally denote the beginning and end of World War II. Why, you might ask, does this memorial not simply carry the identifying title World War II across the top of it? The answer to that is simple, yet complex.

During World War II, despite the fact that almost 100,000 Irishmen fought as volunteers in the British forces, Ireland was officially classified as a neutral country. In fact, in Ireland, World War II was referred to as "The Emergency". Over the years there has been a lot of controversy surrounding the participation of Irish persons in the second world war, including questions about the exact numbers of participants, and about the lack of recognition of the service and sacrifice made by those who fought. This memorial stands as a marker of that controversy because, while it recognizes those who died fighting, it does so without specifically stating the name of the war in which they lost their lives.

Interestingly, just around the corner from this memorial stands a very large World War I memorial dedicated to "Officers and men who served and died during The Great War".

*Click on photo to view larger version.
©Copyright J. Geraghty-Gorman
Posted by Éire Historian at 3:13 AM